Korean food is also well-defined by its soups and stews. A large majority of the foods of these styles are served and eaten with rice or noodles, as they should be. They generally include a lot of vegetables and other produce native to the region and popular in a lot of East Asian dishes such as sprouts and mushrooms. Korean soups and stews can also be identified by the use of seafood as South Korea is a peninsula which relies a lot on fishing in the surrounding waters. Though these are commonalities among a lot of Korean soups, there are of course, also exceptions which use entirely different ingredients. There are soups which use ox-tail and kimchi and there is even a stew that contains spam which originated during the Korean War when Korean refugees would take US Army rations and mix them up in a pot to eat. This particular style of Korean cuisine is very diverse in its flavors and there's no way for me to display all of the different kinds but, here are a few just to get your appetite up. 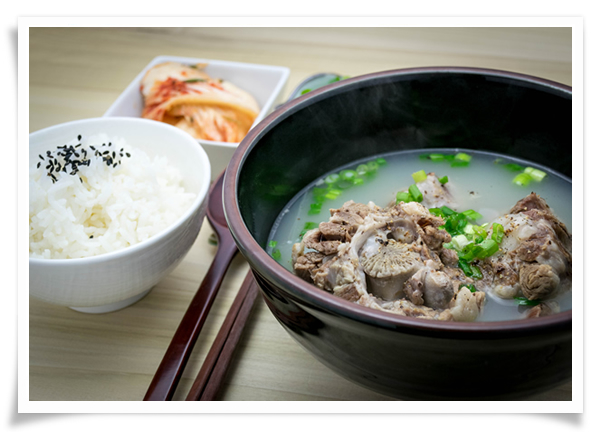 Ox-tail soup - or gori gook in the romanization of the Korean word - is exactly what it sounds like. You take ox-tail, soak out the blood and boil the meat with onions. If you cook it right, then the meat will fall right off of the bones. After it's done cooking you add salt, pepper and other ingredients such as green onions for flavor to your preference. Once the broth is ready, you can eat it with rice and noodles. This dish takes a norotiously long time to cook from scratch. I say this from personal experience. Soaking out the blood alone can take a whole day and then when boiling the meat and onions to create the broth, you have to repetitively bring it to a boil, let it simmer and refill the pot with water once the water level has decreased. Honestly though, it's worth it. The soup is really flavorful and once it's made(so long as you make it in a decent-sized batch), you can eat it for several meals.

Soft-tofu stew or sundubu jjigae is a stew made up primarily of tofu, an assortment of vegetables and either gochujang or gochu garu which are essentially red pepper pastes. The maker of the dish also has free reign to add in different meats, seafoods, mushrooms or other ingredients based on their preferences. The dish can also be made to different spice levels and is generally served with at least a little bit of spice. Like most Korean dishes, it is served with rice. The traditional version of this dish generally included the soft tofu, pepper paste, onions, seafood such as clams and shrimp, and sometimes mushrooms and egg but as Korea became more connected with the world and the dish effused out to other countries, many different versions were created such as sausage jjigae.